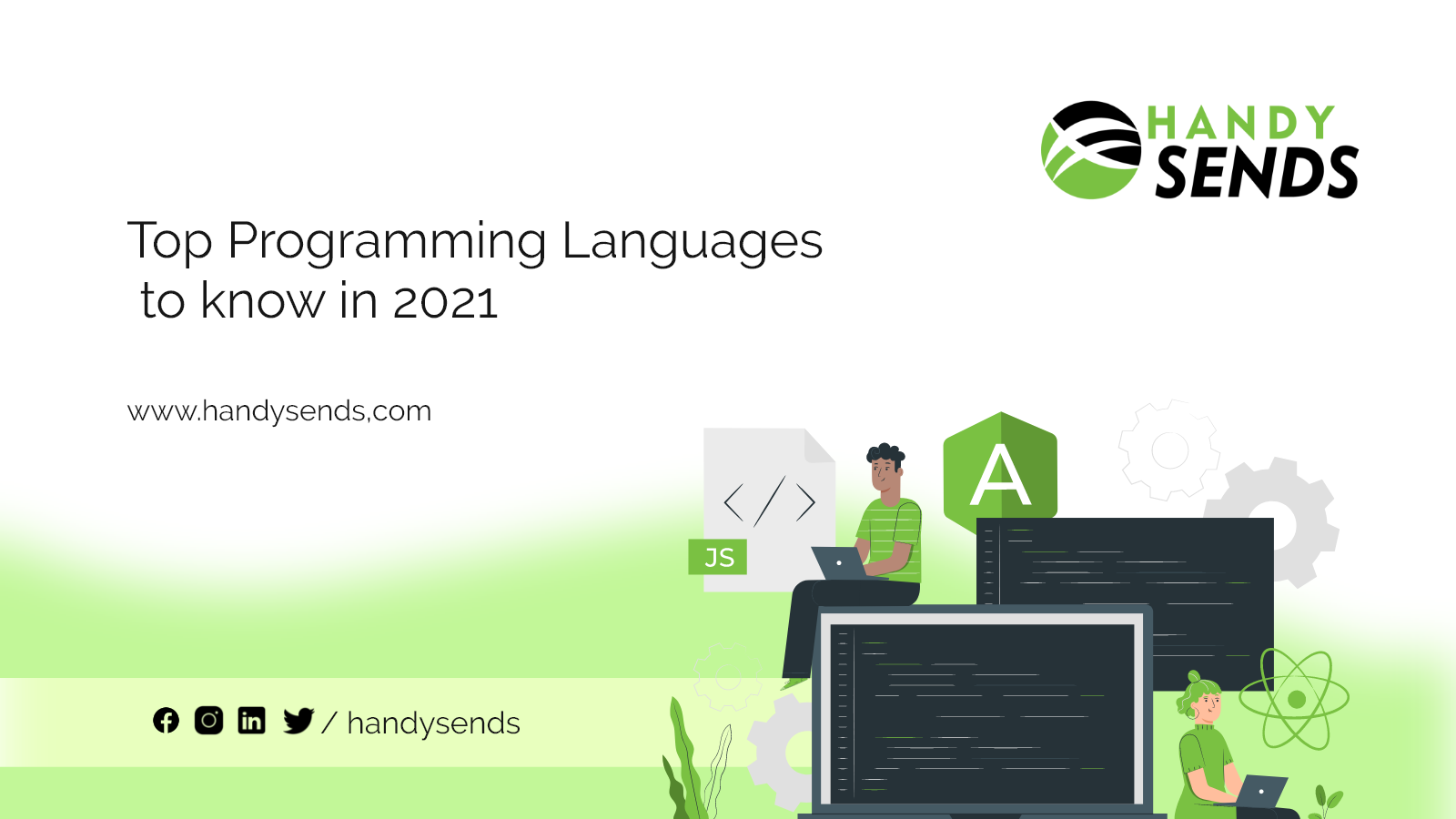 If you are new to software development, the most difficult element of learning to write computer programs is deciding where to begin. There are a plethora of programming languages in widespread usage, each with its set of complications.

Fortunately, as you begin your journey as a product developer, you will discover which programming language is appropriate for you, your preferences, and your career goals.

We go over the greatest and most in-demand programming languages for a variety of widely recognized use cases, including web development, game development, and much more, in the breakdown below.

JavaScript, along with HTML and CSS, is essential for front-end web development. Although JavaScript is a browser-based front-end language, it can also be used to develop a variety of network applications on the server-side using Node.js. JavaScript is one of the friendliest programming languages for novices since it offers a flexible, customizable syntax and works across all major browsers.

Despite its reputation for having responsive features on websites, the language has a wide range of uses, including web development, game development, multipurpose application development, and more. For both front-end and back-end development, JavaScript is used. Its compatibility with well-known frameworks like React, Vue, Node, and others, among others, makes it the finest among developers.

Python is a free, open-source programming language with a large community of developers, an easy interface with web services, simple data structures, and GUI-based desktop applications. These GUIs are applied to build 2D image programming like Inscape, Paint-shop Pro, and so on. Python is used by web frameworks such as Django and Flask, as well as web applications such as Google Apps. It is easy to combine with C and C++, and it’s cross-browser compatible.

It is a widely-used programming language for artificial intelligence and deep learning applications. Python’s syntax is regarded to be clear, instinctive, and nearly English-like, making it a popular choice for beginners, similar to Java.

Python, like Java, has a wide range of applications, making it a versatile and excellent choice when deciding on the finest programming language for your needs. NumPy and SciPy are two Python packages that are commonly used in the disciplines of scientific computing, mathematics, and engineering. TensorFlow, PyTorch, scikit-learn, and OpenCV are among the Python libraries used to build data science, AI, image processing, and PC vision systems.

Swift has been optimized for speed and created from the ground up to address the realities of modern iOS development. In addition to running on every iPhone and iPad, iOS is also the foundation for additional operating systems such as watchOS (for Apple Watches) and tvOS (for Apple TV) (for Apple TVs). It has benefits such as improved readability, performance, and dynamic libraries. These highlights guaranty fewer errors, decreased application size, and improved performance. Swift has two significant frameworks in particular: Cocoa, and Cocoa Touch which is based on application development.

JetBrains’ Project Kotlin, a global programming language, was first created and released in 2011. The first official version was published in 2016.

PHP is an open-source server-side programming language that was created in 1990 and is known for features like cross-platform compatibility, object-oriented programming, easy integration with HTML, CSS, JavaScript, and other languages, as well as extensive community support. Over 80% of all websites on the Internet are built using this language.

C# has a syntax that is like those of other C-derived languages such as C++, making it simple to learn if you are coming from another C-family language. C# is not only the language of choice for Microsoft application development; it is also the language that Xamarin developers used to build cross-platform apps. It is best for Windows, Android, and iOS apps because it uses Microsoft Visual C++ as its integrated development environment.

C is the most widely used programming language, and it serves as the foundation for languages such as C#, Java, and JavaScript. C++ is a more advanced version of C. Many developers today bypass learning C entirely, while others believe that learning C first provides a solid basis for C++ programming. In computer science and programming, the two languages are commonly used.

Developers of C and C++ can use compilers for a wide range of platforms, making applications written in these languages generally portable. Both C and C++ are considered superior programming languages.

Scala (scalable language) is Java’s more advanced relative. Scala combines the greatest features of Java (such as its Object-Oriented Structure and lightning-fast JVM runtime environment) with a more advanced twist. The goal of the language was to discover what problems developers have with another programming language, Java.

The Scala programming language is malleable, allowing it to be used in programming, online applications, flexible arrangements, and game development. Developers can create and alter their data types, allowing them to enjoy the brain’s harmony while knowing those entire areas of faults are unthinkable during runtime.

Scala is suggested for beginners because it is a straightforward language to learn. The majority of enterprises plan to integrate Scala into their operations. In 2021, it may become one of the most popular programming languages.

Go, often known as Golang, is a compiled programming language that was created by Google in 2007 for APIs and online applications, with a syntax similar to C. Because of its fundamental and modern design and syntax familiarity, as well as its ability to deal with multicore and networked frameworks and massive codebases, it has become popular among large IT businesses. Because of its agility and execution, Go is also gaining popularity among data scientists.

It is an open-source language, so developers can see how their efforts are being recognized and valued by programmers all over the world. Go is a suitable low-level language for developers who want to get into systems development. It encompasses numerous the same capability as C and C++, but without the cumbersome syntax. It is the language of choice for creating web servers, data pipelines, and even AI bundles.

It provides you with a variety of enhanced features such as dynamic-composing, type wellness, superior and proficiency, and much more. The language supports multi-threading and can be used in a variety of contexts, including the Distributed framework and Cloud Computing. The finest part about the language is that it addresses many key concerns, such as sluggish organization and execution, as well as the inaccessibility of a large standard library, to name a few. It also includes useful frameworks such as Revel and Beego.

Another emerging brand in the programming world is R! R is an open-source language that is a variant of the S programming language. A major portion of the code written for S runs without modification on R.

It is widely used in the fields of data science, statistics, and machine learning, and it comes with many libraries and frameworks. Statistics are prepared using R-based applications, which include linear and nonlinear modeling, testing, perception, and analysis. R-coded applications can connect to a variety of databases and cycle both structured and unstructured data.

It’s usually well-integrated with a few data-processing breakthroughs, such as Hadoop and Spark. Some of the prominent features of this specific language, such as cross-stage similarity, profoundly expandable, strong graphical capacities, conveyed processing, among other examples, make it a more favored language among developers.

R has a modest expectation of learning and adaptability, and it is not as easy to learn for beginners. R, like other open-source programming languages, has a thriving online developer community, which is constantly learning new coding skills.

Ruby is yet another popular scripting language for web development. Ruby is developed in the 1990s to have a more human-friendly syntax while being versatile. From the standpoint of its object-oriented architecture, it upholds procedural and usable programming documentation.

Ruby is popular among beginners because it has one of the most user-friendly and beneficial user groups. It serves as the foundation for the Ruby on Rails (RoR) web application framework. Ruby is a good language to learn not only because of its vibrant community and simple syntax but also because of its connections with top-tier IT firms. Ruby developers advocate it as a simple language to write in and as a language with a relatively low learning curve. These accolades have sparked a burgeoning Ruby developer community and a growing interest in the language among beginners.

An ultimate guide to Cloud Computing